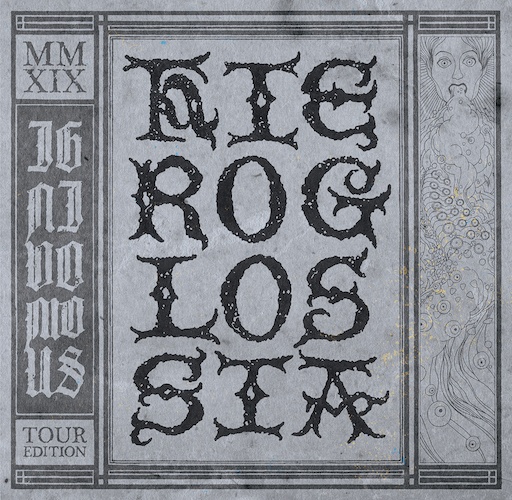 Within the wide-ranging expanse of death metal some bands devote themselves to music of monstrous, primeval power, ruthlessly savaging the mind with the sounds of violence, oppression, and horrifying degradation. The Australian band Ignivomous are within that lineage, and have been honing their evil craft for more than a decade. Their growing mastery is on full display in their new album, the first one since 2012’s Contragenesis. Entitled Hieroglossia, it will be released by Nuclear War Now! Productions on November 15th.

For this ravaging new album the band’s core membership of Sean Hinds (guitar), Chris Broadway (drums), and Jael Edwards (vocals) has remained in place, augmented by the recording debuts of guitarist Lewis Fischer (Altars) and bassist Chris Jordon (Inverloch, Eskhaton). Thematically, we’re told, “Heiroglossia continues Ignivomous’ investigation into topics of Philosophical pessimism, influenced by the works of Thomas Ligotti and E.M. Cioran, and Gnostic concepts of the fallen and hostile nature of the material world.”

Today we’re presenting a new song from Heiroglossia, but before we get to today’s premiere, let’s first consider a previously released song from the album, because you’ll encounter it first in the Bandcamp player below. END_OF_DOCUMENT_TOKEN_TO_BE_REPLACED