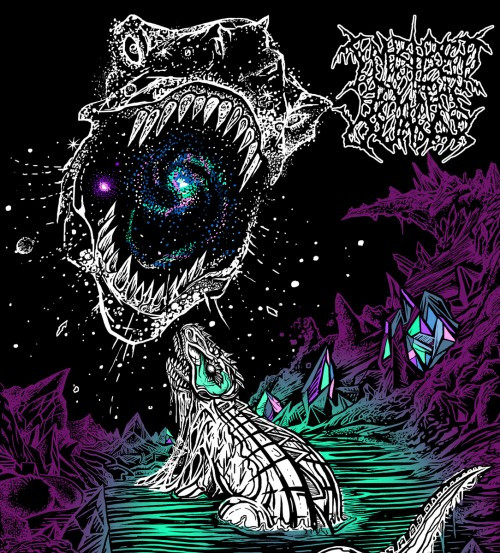 (DGR wrote this review of the first demo by a Sacramento group who have apparently been Imbibed By the Quasar.)

Imbibed By The Quasar are a new Sacramento-based death metal band, one born from the seeming ashes of the group Bispora (who at the time had hung up their hats but have since apparently reformed), a project known as Lunar Stereo, and Malevolent (whose drummer Greg Chastain pulls double time in both bands and whose keyboardist Jeff Clifford contributed a ton of material from other projects he had).

It’s super-rare that you’re able to find a project right as it starts out. Sometimes the planets align, however, and you get to see something from its genesis all the way to its baby steps and eventual exposure to the world. In this case I caught word of Imbibed By The Quasar very early while doing my seemingly random monthly check-in with bands I hadn’t heard from in a bit. Though Bispora weren’t going to be doing anything for a while, I was super-interested in learning what might be produced by the combination of a huge chunk of that band and people from Malevolent, a band who at that point had gone radio silent for some time.

On the group’s Facebook page, the guys had said it was going to be more death metal focused than Bispora. Given the history of some of the musicians in the band, this wasn’t too shocking a turn. August 1st saw the release of their aptly titled Demo 2014, ostensibly the world’s first exposure to the band. Let me tell you right away, boy is it a weird way to spend eight minutes and forty seconds. END_OF_DOCUMENT_TOKEN_TO_BE_REPLACED