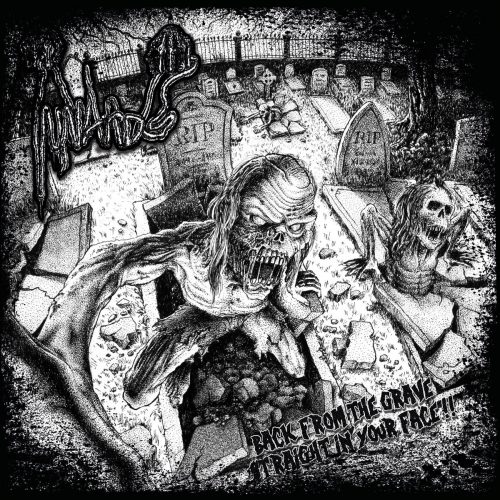 Victor Costa‘s cover art for the debut EP of the Portuguese death metal band Innards is a perfect accompaniment for the ghoulish delights the EP holds in store. The music, like the art, is an eruption of cemetery horrors coming right for your throat. In other words, this isn’t lurching, cadaverous death metal, even though it’s decidedly gruesome and rotten to the core. No, Innards (true to their name) are coming for your guts with unhinged relish. The EP’s title is thus similarly appropriate: Back From The Grave, Straight In Your Face.

There are only three songs on the EP, but they make for an explosive first strike. Two of those songs have previously debuted, and today we’ve got the premiere of the third one, an absolutely crazed onslaught wonderfully named “Enlightenment Through Hate“, which features none other than guest vocals by Kam Lee of Massacre and a guitar solo by none other than Frank Blackfire from Sodom. And with all three tracks now out in the world, you have a fully informed basis for picking up the record well in advance of its February 21st release by Transcending Obscurity Records. END_OF_DOCUMENT_TOKEN_TO_BE_REPLACED