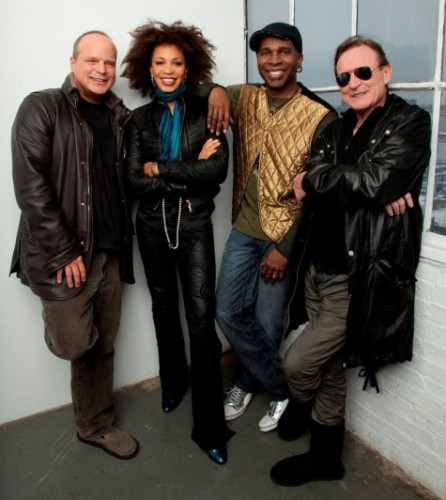 We interrupt your regularly scheduled programming to bring you this recent discovery (thank you Blabbermouth). It’s likely that the news will mean nothing to anyone reading this except the real old-timers, but for those of you as ancient as I am, it will definitely mean something. And those less ancient might learn a thing or two along the way. By the way, the music isn’t metal, but . . . it’s metal. If you know what I mean.

The news concerns a band called Spectrum Road. The members of Spectrum Road include some genuinely legendary figures — Jack Bruce, one of the founding members of Cream (along with Eric Clapton and drummer Ginger Baker), a hugely influential songwriter, and a widely respected classical, jazz, and Latin musician; and Vernon Reid, the founder and principal songwriter of Living Colour and (among many other recognitions), the holder of the #66 position on Rolling Stone magazine’s list of the 100 Greatest Guitarists of All Time.

The band also includes drummer Cindy Blackman-Santana, who was the drummer for Lenny Kravitz’s band for 14 years and an accomplished jazz drummer as well as rock musician (she’s also married to Carlos Santana), and John Medeski, a jazz keyboardist involved in many projects, but principally a groove-oriented jazz trio called Medeski Martin & Wood.

For me, Jack Bruce and Vernon Reid are the real draws for this project. After the jump, there’s a video of Spectrum Road performing live. Just watching Bruce and Reid perform together is amazing — and fuck, Vernon Reid can still really shred. The icing on the cake, though, is Cindy Blackman-Santana; it’s a kick to watch her tear it up on the  drums. Spectrum Road will be releasing a self-titled debut album on June 5 via Palmetto Records. END_OF_DOCUMENT_TOKEN_TO_BE_REPLACED