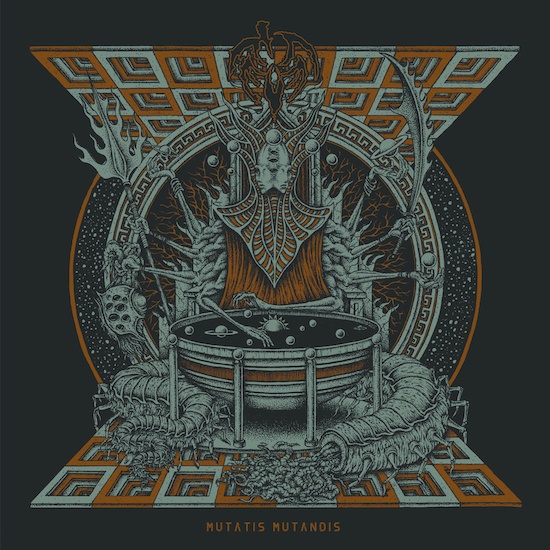 In the first minutes of the opening song “Of Being“, the Athenian band Kevel lay before the listener a blueprint of what will become the foundation for the imposing and wondrous edifice of their new album Mutatis Mutandis, which we’re premiering today. In that opening, a riveting drum solo is joined by heavy groaning chords and shrill discordant arpeggios. In one fell swoop, the music hybridizes primal physical punch, dismal and depressive moods, and spine-tingling sensations of flaring madness.

The band’s ability to create teeth-on-edge tension and earth-quaking heaviness comes to the fore again and again over these 50 minutes. The nuanced yet persistently skull-cracking drum performance repeatedly threatens to steal the show, both amplifying the songs’ most intense moments and creating fascinating contrasts within all of the band’s other richly multi-faceted movements. The bass tone possesses the heft of granite but the nimbleness of larks. And the guitarists are highly adept at creating tension and turmoil.

But it turns out that all these riveting contributions really are just the foundation, and what Kevel have created around it is a gnarled, frightening, yet shining tower that reaches into the stars, almost as astonishing and awe-inspiring in its visions as it is shattering in its impact. END_OF_DOCUMENT_TOKEN_TO_BE_REPLACED