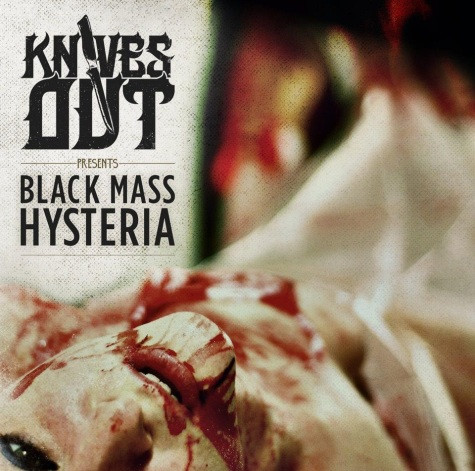 (Are you looking for some twisted, clawing music and some violent, gore-drenched imagery? Well, look no further!  groverXIII has got you covered.)
I used to love nu metal.

I know… that’s not the best way to start off a post. The very mention of nu metal is generally sufficient to earn the scorn of metalheads everywhere, even though a lot of them got started on nu metal just like I did. And to clarify, it’s not like I still listen to a lot of nu metal. I still listen to Incubus’ S.C.I.E.N.C.E. and Mudvayne’s L.D. 50 on occasion, but that’s about as far as I go. Still, I have some fond memories for bands that I discovered during nu metal’s heyday. I mean, System Of A Down (whom I refuse to classify as nu metal) are still personal favorites, and I’m still hoping for a reunion album.

Anyway, that brings me to Knives Out!, a band comprised mostly of former members of two now-defunct bands that I discovered in the nu metal era. Knives Out! features Todd Smith and Jasan Stepp, two guys from Dog Fashion Disco (whose Faith No More/Mr. Bungle worship took the style to a totally new level); Dave Cullen, who plays bass for Polkadot Cadaver, the spiritual successor to Dog Fashion Disco, which also features Smith and Stepp; and Tommy Sickles and Tom Maxwell, formerly of Nothingface, who I suppose played nu metal, but put such a psychotic, violent twist on the music that they seemed to transcend the label. (Maxwell is also a member of Hellyeah, in the interest of full disclosure, but I’m going to ignore that for this band’s purposes.) Nothingface’s Violence and Skeletons were personal favorites for quite sometime and still get a listen now and again, and Dog Fashion Disco’s entire discography still finds a place in my regular listening rotation. END_OF_DOCUMENT_TOKEN_TO_BE_REPLACED