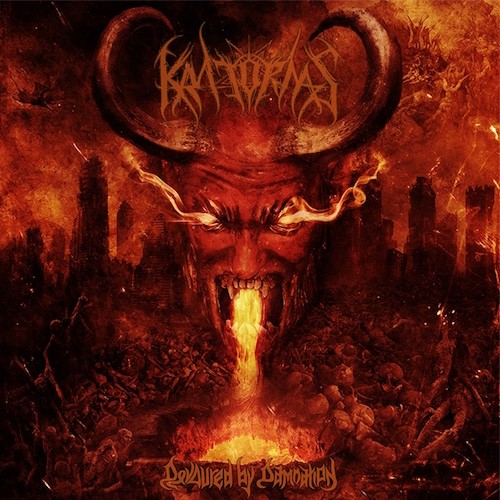 The cover art for the new album by Kratornas could hardly have been better conceived. Like the artwork, the music pours sulfurous satanic hellfire down upon the damned (and everyone else) in a superheated torrent. The album’s name suits the music as well: Devoured By Damnation. And there’s no reason to just take our word for it, because below you’ll find our premiere of a full album stream to coincide with its release today by Grathila Records.

Kratornas began in the early ’90s as the solo project of a musician in the Philippines named Zachariah — though the debut album of Kratornas didn’t appear until 2007. In 2011, after the release of the second Kratornas album, Zachariah moved to Canada. And here we are, roughly 7 years after the last album, ready to be scorched by the new one. For this album, Zachariah is accompanied by a human drummer, GB Guzzarin, though he continues to handle vocals, guitar, and bass by himself. END_OF_DOCUMENT_TOKEN_TO_BE_REPLACED