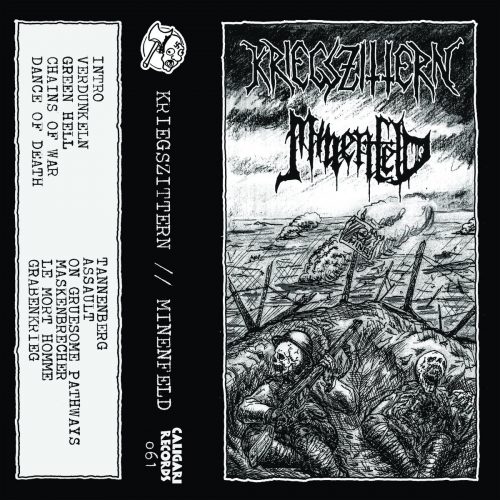 In August 2015, I came across the debut demo of a German band named Kriegszittern that proved to be a huge — and terrifyingly good — surprise. As I expressed in a review: “This is ghastly, primeval death metal mixed with punk rhythms that generates a corrosive aura of indefinable horror while at the same time making you want to helplessly bang your head. It’s raw, raucous, and ravenous — and highly recommended.” Now, the same Caligari Records that released that demo on tape is bringing out the band’s new release — and this time it’s an LP-length split that includes not only new material by Kriegszittern but also the debut recordings of another very impressive German death metal band, Minenfeld.

What we have for you is a stream of the new tape in advance of its release this Friday, February 3. The song stream plays just like the tape would play (at least in its formatting), with all the Kriegszittern songs streaming as a single track (Side A) and all the Minenfeld songs streaming as a second track (Side B). Here are a few introductory thoughts about what you’re about to hear, to prepare you for the onslaught if nothing else. END_OF_DOCUMENT_TOKEN_TO_BE_REPLACED 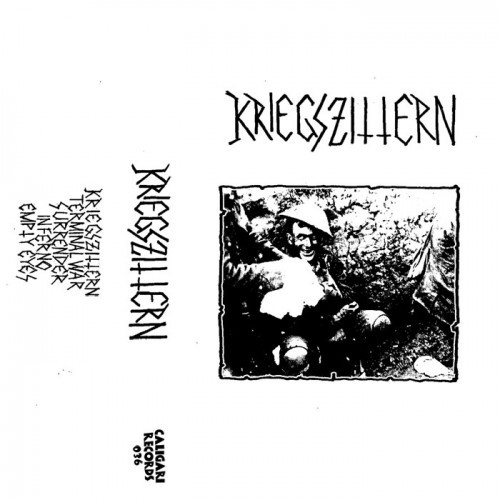 In June of this year a band from Mülheim, Germany, named Kriegszittern released their first demo via Bandcamp, but I discovered it only after learning more recently that Caligari Records would be releasing it on tape. I now try to check out everything Caligari puts out, because I’ve had such good luck with their selections in the past — and this demo proved to be another winner.

The five songs on the demo rush by in less than 17 minutes, but Kriegszittern make those minutes count. The opening track, which bears the same name as the band, begins slowly and dismally, eventually bolting forward in a gritty sandblast of distorted guitars and pneumatic drums, with a vocalist whose echoing roars and howls sounds like a cross between a deranged wildcat and a demonic executioner. END_OF_DOCUMENT_TOKEN_TO_BE_REPLACED