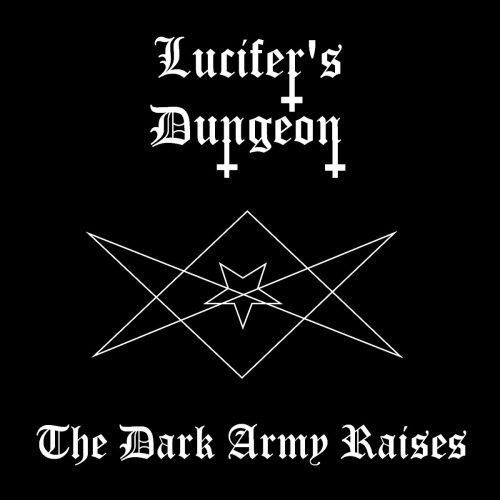 The Dark Army Raises is the debut album of the Russian band Lucifer’s Dungeon. It was originally released in digital form by the band earlier this year but is now slated for wider distribution on CD (and digitally) by GrimmDistribution on May 7th. Today we’re helping spread the word about the new release by hosting a stream of the album’s second track, “Unconcious Faith“. And while this may not qualify as a premiere, given the album’s previous digital release, it will probably be the first exposure to the album by many of our visitors.

For that reason, it’s also worth noting that the tracks on The Dark Army Raises do not all sound alike. While black metal shapes much of the album, even in those songs the music diverges. “War”, for example, is alternately brooding and chillingly delirious, while “Burn Your Dogma” is haunting and depressive in its slower movements and anguished in its bursts of speed and intensity.

Yet black metal is only one of this hour-long album’s faces; it also includes ambient tracks, such as the opener, “Dungeon”, in which ethereal choral voices rise up above dark, droning tones that create an ominous atmosphere, and “The Last Day of the World”, which is mystical and hypnotic, gleaming and cold. END_OF_DOCUMENT_TOKEN_TO_BE_REPLACED