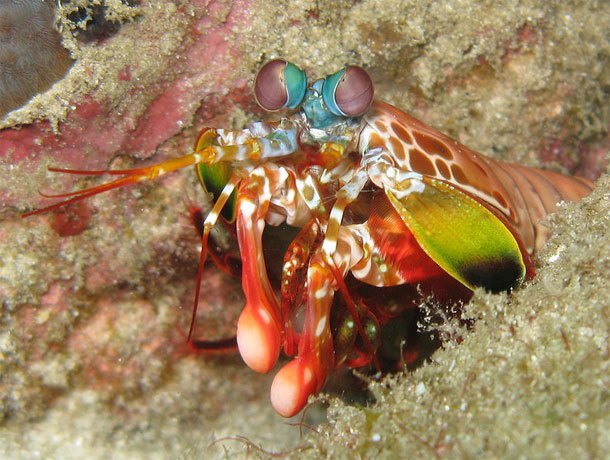 While you’re waiting breathlessly for the next full installment of THAT’S METAL!, I have a couple of items I’d like to share, to make the pain of waiting somewhat less traumatic.

For my first item, I give you the mantis shrimp. Not long ago, The Oatmeal prepared a comic strip about the mantis shrimp that made the rounds on the interweb. It described facts about this creature that make a strong case for anointing it the MOST METAL THING ALIVE, including some of these (I sourced other facts included below from this article):

Our eyes have three types of color-receptive cones (green, blue, and red). Butterflies have five, enabling them not only to see two colors we don’t even have names for, but also a massive spectrum of color that our brains can’t process. The mantis shrimp has sixteen color-receptive cones.

The mantis shrimp is one of the most creatively violent creatures on earth. It has two hinged arms normally held under its head. In the “spearer” species, the arms end in an impaling spike, while the “smashers” wield crushing clubs. END_OF_DOCUMENT_TOKEN_TO_BE_REPLACED