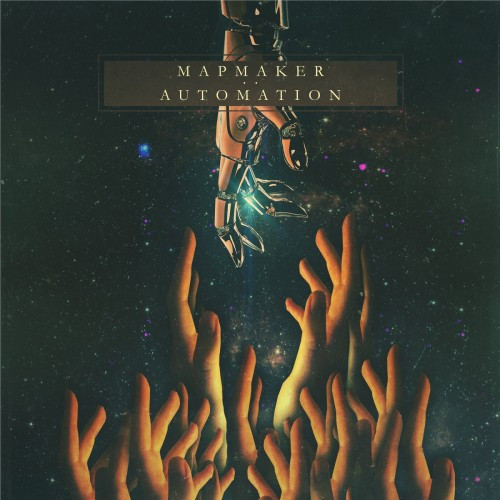 (Andy Synn wrote this review of the December 2014 album by an Indianapolis band named Mapmaker.)

In a crowded scene where the word “Progressive” has been bastardised and bandied about so much that it’s become almost meaningless, a band like Mapmaker, with their melding of proggy, emotive instrumentation and bruising, Deathcore-ish heft, seems like precisely the sort of band you’d expect me to instantly dislike.

Yet I must admit I was drawn in by the fantastic cover art (never underestimate the value of a good album cover, kids), and decided to give the Indiana natives a chance, hoping to discover something new.

And I’m very glad I did, because this is a fantastic (if flawed) gem of a debut.

In fact although the album may not be perfect, Automation more than justifies the band’s use of the “Progressive” tag (de rigeur sci-fi concept, notwithstanding) with an enviable wealth of ideas and focussed ambition, every element being organically woven together in layers of carefully crafted texture and nuance, all bolstered by an extremely heavy low-end of juddering intensity.

Doubtless it won’t be for everyone, but in a scene where shallow superficiality and bland technicality are often used as a substitute for real creativity and credibility, Automation clearly stands head and shoulders above the rest, both on the strength of its song-writing and the impressive clarity of its vision. END_OF_DOCUMENT_TOKEN_TO_BE_REPLACED