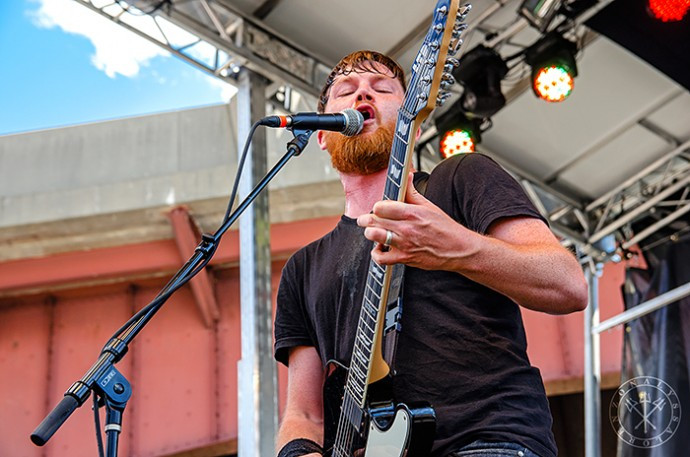 (In this post we present BadWolf’s interview of Mark Kloeppel, frontman for Baltimore’s Misery Index, conducted live at Maryland Deathfest — with photos taken there by the talented Alyssa Lorenzon.)

One of the highlights of my trip to Maryland Deathfest was the opportunity to see Baltimore’s own Misery Index live twice in a single weekend. The No Clean Singing crew has a soft spot for relentless mixes of grindcore and death metal, and Misery Index are among the best bands in that vein at the moment—not only is their rhythmic attack, weighed down by bassist Jason Netherton (formerly of Dying Fetus) and drummer Adam Jarvis (also of Pig Destroyer), fierce in a way many of their peers are not, but their approach is also intellectual. The band has a strongly anarchist-liberal lyrical bent, which only adds to the vitriol and complexity of their music. It’s the kind of death metal that makes me want to revisit it over and over.

Mark Kloeppel joined the band in 2005, and plays guitar, as well as screams, on their finest run of albums. His vocals and melodic guitar lines dominate the band’s 2014 album, The Killing Gods, which made up much of their MDF set lists. It’s the most melodic album in the band’s discography, but Kloeppel himself seems less than harmonious. He sat down with me behind a tent in the blazing Baltimore sun to talk about the new album, parenting, and how, economically speaking, we all lose.

It seems like there wasn’t a lot of activity on the Misery Index front for a couple years there. I remember Heirs to Thievery came out when? 2010? Four years ago?

Yeah. In 2010, the touring cycle started with us going out with Dying Fetus and then picking up our new lead guitar player. We did some other stuff… We toured with Grave. We did a whole bunch of stuff. It’s kind of hard to remember everywhere we went. I know we went to Indonesia, Japan, Australia, and a lot of places in South America like Brazil and Colombia. We did a tour with Cannibal Corpse in the States. That was the last thing I think we did in the States before this.

Why the recording gap? You guys were on a pretty steady two years per album clip for almost a decade.

Yeah, and that sucks! It’s like when you first start a band. When you first start a band, you spend a good five years crafting your very first songs. You go play shows, and it’s awesome because you’ve spent so much time crafting good songs and you grow and stuff like that. Being a seasoned musician and not being able to dedicate the proper amount of time to make a quality record, you feel like you’re being robbed.   We stuck to the tight schedule that was imposed upon us by the label. It was kind of necessary to build the band for Discordia, Traitors, and Heirs to Thievery. After that, we were done with that schedule. We didn’t want Misery Index to do that anymore. We just spent the time you’re supposed to spend writing a record.    END_OF_DOCUMENT_TOKEN_TO_BE_REPLACED