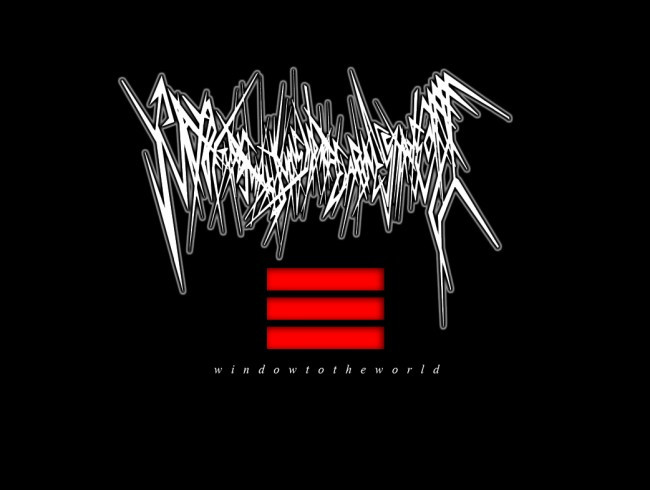 (Here is Part 2 of an extensive guest review by Rob Watson that began yesterday [here]. The music can again be found at the end.)

Last time, I got to grips with the opening three tracks of Window to the World. However, these first three songs may be difficult to appreciate if you are not an avid fan of the intimidation, claustrophobia, and general evil that enters into the sound of a lot of modern metal (a band that exemplifies this approach to sound are the Australian death metal outfit Portal). When I listen to the former half of Window to the World, I almost feel as if oxygen is gradually being sucked from the music, so that soon there will be no fresh air to breath and I will be unable to remain in the narcotic wasteland that has been carved within the music. Fortunately, much of the second half is pure melodious oxygen, fulfilling, magnificent, and blossoming with a totally different character than the first.

This metamorphosis of sound begins with ‘The Sanest Sentence’, which is probably the most in-depth song on the album compositionally. It begins very gently, as though it is barely there at all. The development of the music is like what you might see at dawn on a cold morning from within a wood, the light slowly penetrating the foliage. It is rather like a revelation, of sorts: A new corridor within the synaptic networks of the mind is being explored by this gentler, more graceful side to the band’s work.

Unlike many of the motifs and riffs that have gone before in this album, it has a strongly rooted harmonic structure. The chromatic, jarring style of the earlier parts of the album, which resembled classical composers such as Stravinsky or some of Shostakovich’s more aggressive compositions, has been replaced by something more akin to Ravel or Debussy. The immense beauty and simplicity of pieces like ‘Pavane Pour Une Infante Défunte’ or ‘Prélude à l’ Après-midi d’un Faune’ display a similar character to the opening of ‘The Sanest Sentence’, as do certain themes from video game soundtracks, especially those composed by Nobuo Uematsu (the Final Fantasy series is the most famous of his game soundtracks). END_OF_DOCUMENT_TOKEN_TO_BE_REPLACED

(We apparently have a reputation among some denizens of the web for being a “long-winded” metal site. The following guest review by Rob Watson will do nothing to change that reputation. In fact, it’s so extensive that we’re dividing it into two parts, with Part 2 coming tomorrow [now posted here]. The music can be found at the end.)

“Robert, this object has wu.” This is the sentence that immediately sprung into my thoughts when I first heard the debut album of Maybe That’s Why Human’s Drink the Darkness That is Coffee, Window to the World. The sentence comes from a book by Philip K. Dick, one of my favourite writers, and refers to something which “represents nothing”. It uses the word ‘wu’ in derivation from the Taoist spiritual text the I Ching, in which the concept of ‘wu wei’ is to possess the foresight to know when to act and when not; to be able to drift effortlessly upon the breeze of time, merely glancing off the fabric of reality, balancing the forces that flow constantly through it, opening up endless possibilities of interconnectedness among the corridors of the universe. In short, the aforementioned object is very rare, and very, very special.

This is an important comparison, because it is the one that is most obvious, even to the casual listener. The album’s uniqueness is intrinsic to its appeal; it has a feel that, although not stretching as far as being ‘anti-music’, is most definitely ‘anti-djent’ (if ‘djent’ is defined to be a genre of music stereotypically featuring downtuned 8-string guitars, pristine production devoid of almost any organic substance, and syncopated palm-muted double-octave power chords).

Another key concept of Taoism is that of Yin and Yang (dark and light). The idea of ultimate polarity existing within the universe and resident in all things (though not always with both poles together) is a facet of this album that is central to its purpose. Parts of this album will twist your ears into a new, as yet undefined shape; so random and unprecedented are the levels of raw energy that it exudes that at times you may feel completely disillusioned and perhaps even put off from persevering with the album. However, the band temper their brutal, uncaring approach with melodic passages that will make you want to shed a tear or drift off, unhampered by gravity, to far-away lands of permanent plenitude, unscathed by the atrocities of human society. END_OF_DOCUMENT_TOKEN_TO_BE_REPLACED