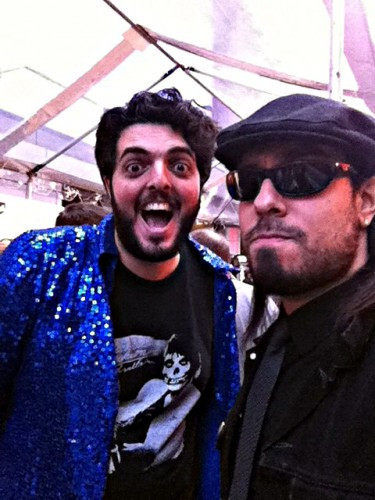 (Rev. Will continues with his Keyboard Warriors interview series, and today’s victims subjects are the creators and operators of Metal Injection.)

Before the well-known MetalSucks, there was and still is Metal Injection, a behemoth of a metal website that offers a cornucopia of metal-related content in a variety of formats. It’s like a virtual Swiss Army Knife of fixes for one’s metal cravings!

Metal Injection is more a Web TV site than a blog even though they do have an active blog section, and the main perpetrators behind this multimedia website are none other than Robert Pasbani and Frank Godla. Robert is generally the Pikachu of the site while Frank is generally the dude behind the scenes (literally)  holding the camera filming Robert on-site covering insanely cool events such as the annual Revolver Golden Gods Awards show. But one most definitely wonders: how did they get to where they are today?

From across the cyber-void, Robert and Frank thought-spoke into the neural transcriptor and discussed the origins and workings of Metal Injection at the speed of a quark on steroids. By the time you see this, they are already light-years ahead in their busy schedules working on the next big thing for their little baby.

Rev. Will: Let’s start from the beginning. Was the name “Metal Injection” thought up like that to give off the feeling that metal music can be as addictive as drugs?

Robert Pasbani: That’s certainly part of it. I just tried to come up with a name that had the term “metal” in it and sounded cool, and including “Injection” evoked so much imagery that I thought it would be perfect.

Frank Godla: Well if you think about it, isn’t metal appreciation very much like a drug? Aren’t the metalheads you know absolutely hooked and passionate about it? Most people find metal through a gateway rock band, and before you know it,  you’ve moved on to way harder and faster stuff even your friends don’t understand. You don’t often meet metalheads who drop it like a bad habit either, it’s just something that sticks with you. I can tell you metal music is the most important thing in my life, and because it’s a 25-year-old habit that isn’t going away, I really don’t mind referring to myself as a metal junkie. END_OF_DOCUMENT_TOKEN_TO_BE_REPLACED