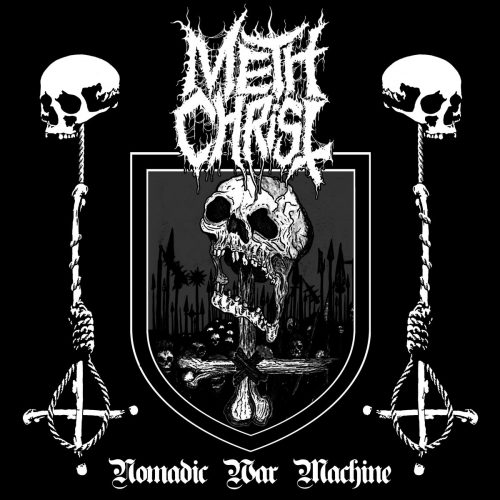 (New Zealand-based writer Craig Hayes (Six Noises) joins us again with this review of the debut album by NZ’s Methchrist, which has just been digitally released on Bandcamp.)

Methchrist are a belligerent, hate-driven war metal trio from Dunedin, New Zealand. And the band’s Nomadic War Machine debut is the third album from a New Zealand war metal band that I’ve covered here at No Clean Singing in recent times.

To be honest, it’s not the easiest task coming up with fresh ways to unpack more bestial metal from the southern reaches. But that’s not because Nomadic War Machine is uninspiring. The album’s actually a skull-cracking riot –– it’s as fuelled by pure fucking spite as it is any creative ambitions –– but I inevitably feel like I’m repeating myself talking about war metal, because the subgenre’s somewhat of a stylistic cul-de-sac.

Don’t get me wrong, that’s not a criticism of war metal’s established characteristics. I mean, I love crust punk and d-beat to death, and they’ve got a limited range of musical hallmarks and potential descriptive options too. It’s simply that war metal’s parameters are so resolutely set in stone. There’s only so much you can say about the subgenre before you’re reiterating the same points or uttering the same phrases. END_OF_DOCUMENT_TOKEN_TO_BE_REPLACED