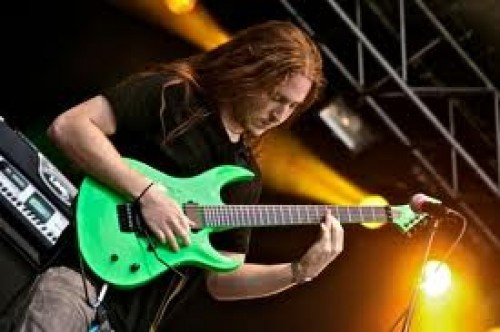 (NCS writer Andy Synn packed a lot into a May 17 show in Leicester, England — a review of the show, an interview of Gorod, and today an interview of Michael Keene, guitarist and song-writer par excellence of The Faceless. I’m biased, but I really enjoyed reading this, and there’s a lot of revealing info in it, too. But mainly I wonder how Andy got this interview after he explained he was from a site called NO CLEAN SINGING.)

On the same Leicester stop where I was lucky enough to interview Gorod, I also had the opportunity to grab The Faceless’ guitar shredding master-mind Michael Keene for an interview of his own.

Reading the transcript you’ll get some insight into the man himself, his goals and influences, see how we bonded over a shared love of Extol, and get his thoughts on how it feels to be the only death metal band on a non-death metal label. All this plus some of the conceptual and lyrical influences which will be present on the next record!

Ok, so how’s the tour been for you and the band so far?

MK: Well this is the fifth date of the tour and it’s been amazing. I think 3 of the 5 shows so far have sold out. It’s been awesome. Every show.

How about things with the other bands?