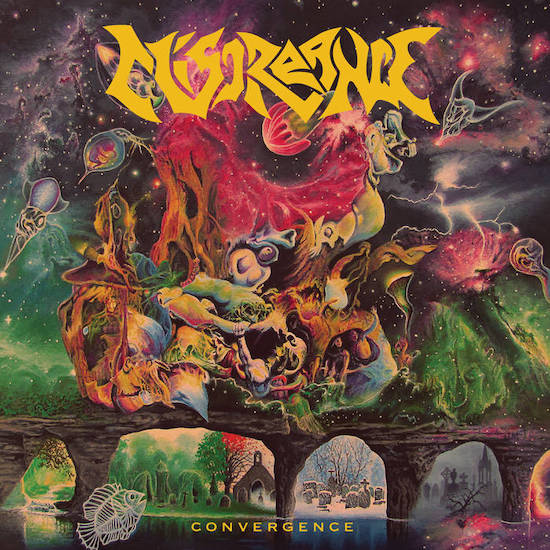 Some of us have some fun playing the game of “What Will This Sound Like?” after seeing the cover art and logo for a band we’ve never heard before. Statisticians haven’t calculated the numbers, but it sure seems like a significant percentage of the time the art and logo telegraph the music, at least for people who’ve been paying attention to metal for a fair number of years.

But if you’re like us, you’ll be perplexed when you see the cover of Convergence, the debut album from the Italian group Miscreance. It’s wildly colorful, and the images packed into it create a crazy collage. Stars, lightning, sea creatures, heads, limbs, wombs, cemetery scenes as if glimpsed through inter-dimensional windows in a wall, lots of other things too difficult to identify… it’s a head-spinning vision, and it’s not a clear message about the style of music. The band’s logo doesn’t really telegraph a clear message about the music either.

Maybe you already know, because Miscreance did put out a demo in 2018 (From Awareness to Creation) and three tracks on a split with Australia’s Vile Creation last fall, and a couple of preview songs from the new album have surfaced, but if you missed all of that you might be befuddled right now. But then you see a photo of the band, and you’ll think, okay I got it now: This is a thrash band — a real old-school thrash band. END_OF_DOCUMENT_TOKEN_TO_BE_REPLACED