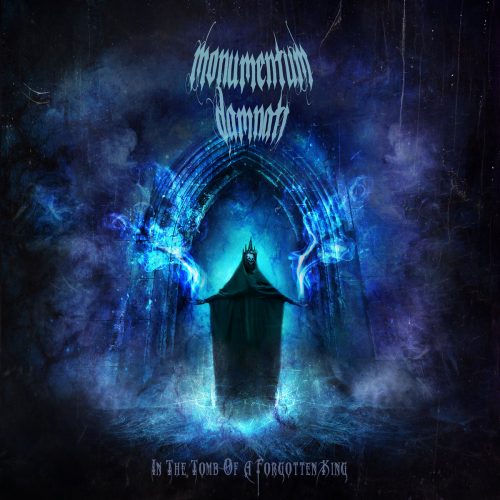 We are told that Monumentum Damnati is an international project whose leaders are based in Eastern Europe, with attachments to better-known projects. Here, they have chosen to conceal their countenances in grotesque masks and their names with pseudonyms, allowing their dark, genre-bending music to speak for itself. Their first presentation is In The Tomb Of A Forgotten King, a full-length album that will be co-released on March 30th by the triumvirate of GrimmDistribution, The End Of Time Records, and More Hate Productions.

As mentioned, the music on this debut album is difficult to classify in genre terms, drawing as it does from traditions of melodic death metal, doom, and the amorphous category of music that has come to be known as “dark metal”, accompanied by accents of orchestration. A further hint about the band’s disinterest in being tied to a particular defined genre comes from reference points that are provided, which include such disparate names as Crematory, Trail Of Tears, Ajattara, The Vision Bleak, Dark the Suns, Morgul, and Enshine.

It’s probably not the case that any one song on the album can be held up as a representation of the album as a whole, but we do have a track to share today, presented through a mysterious music video. Its name is “Infernal Sun“, and  the tale it tells is emblematic of the band’s occult and mythic inspirations. END_OF_DOCUMENT_TOKEN_TO_BE_REPLACED