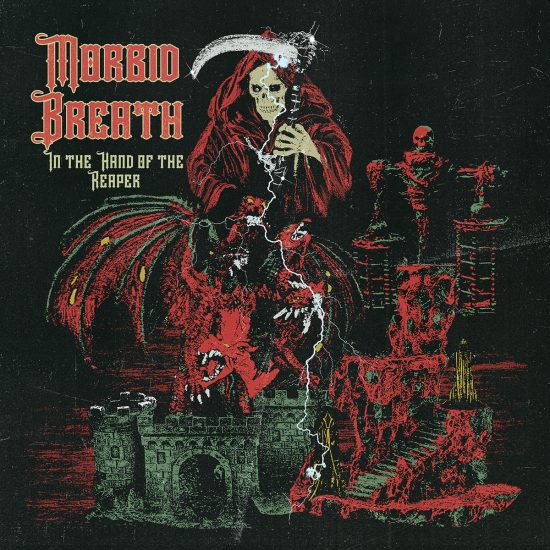 Like many metal genres, thrash manifests itself in different ways, though some would say the variations are much more limited than in the sonic realms of (for example) death and black metal. And perhaps because variations on the style seem to operate within a limited range, the quality of the riffs becomes all the more critically important.

To cut to the chase, the Swedish band Morbid Breath write riffs that are lethally infectious. And as you’ll discover from our premiere of a track off their debut EP In the Hand of the Reaper, that’s not the only thing they do really well.

The febrile, pulsating riff that launches “Ancient Beasts” sinks its hooked claws into the listener’s brain damned fast, backed by punishing drum bursts, heavy and mauling bass lines, and savage, serrated-edge death-metal growls.  When the rhythm converts to a hammering gallop the band introduce an element of the supernatural through an eerie, sinister chord progression, and there’s a glorious, swirling and screaming guitar solo in the mix, as well as jolting sequences that will kick-start your headbang reflex.

But it’s that opening riff, which repeatedly rears its venomous head, that makes the track so fiendishly addictive. The punishing heaviness and bestial vocals are sweet icing on the cake. END_OF_DOCUMENT_TOKEN_TO_BE_REPLACED