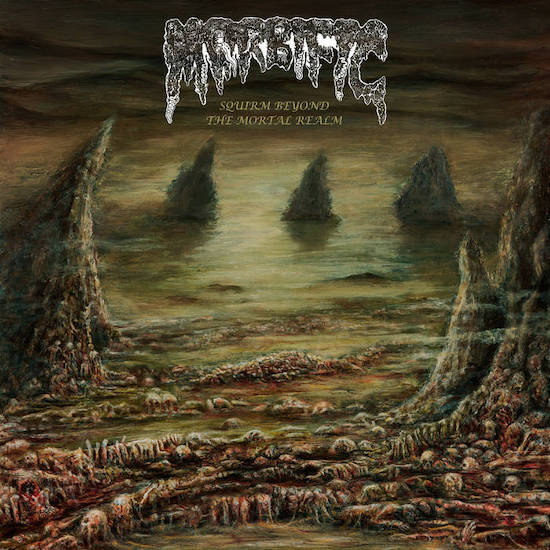 Contemplate the artwork of Chase Slaker that introduces people to the second album by Morbific. Take in the wretched, lifeless vision of skeletons strewn about and piled high in chilling monoliths. Consider also the album’s name — Squirm Beyond the Mortal Realm — and song titles such as “Meal From An Open Skull”, “Initiation Into Oblivion”, “Malignant Germination”, or the track we’re premiering today, “Suicide Sanctum“.

All of that foretells death (metal) and the presence of the supernatural.

These signposts are also very accurate. Morbific‘s brand of death metal is undeniably raw and foul, well-calculated to channel sensations of disease, putrefaction, and madness while giving your bones a brutal beating — and creating an atmosphere of supernatural horror while they do all that.

That would be enough for most fans of rotten-to-the-core death metal, but it turns out that Morbific are ridiculously good at making their creations head-moving and “catchy” as well as hideous. END_OF_DOCUMENT_TOKEN_TO_BE_REPLACED