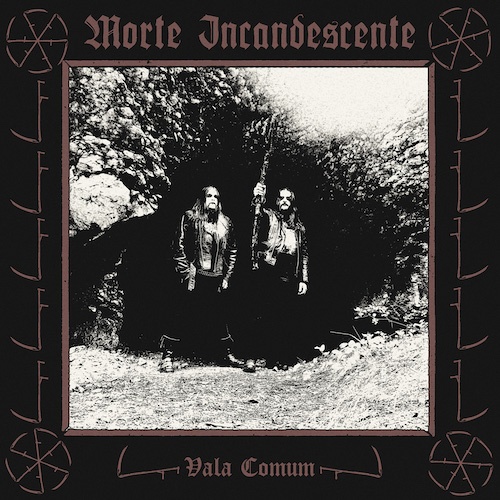 Portuguese black metal isn’t a monolithic or monochromatic sound, any more than black metal is in any other country. But it seems undeniable that one of the strongest and oldest strains of the black arts in Portugal is a particularly raw and hostile form of black metal. Among the progenitors of that movement are the two men behind Morte Incandescente, whose veteran talents have been built through involvement in an extensive array of bands over more than two decades.

They are perhaps best known from the work of their principal bands — Vulturius with IRAE and Nocturnus Horrendus with Corpus Christii — but Morte Incandescente has been much more than some side project. Indeed, on October 31st the band’s fifth album will be released through Signal Rex. What it shows is the benefit of veteran talent.

To be honest, a lot of raw black metal seems mainly calculated to inflict ruin, in the most ruinous ways possible, and that in itself can become monotonous and un-memorable. Morte Incandescente‘s new album, on the other hand, is definitely neither of those, as you’ll learn through the song we’re premiering today. “Nós Somos O Underground” (“we are the underground”) is primitive, feral, vicious, and viscerally gripping, and yet also remarkably dynamic and laden with many hooks. END_OF_DOCUMENT_TOKEN_TO_BE_REPLACED