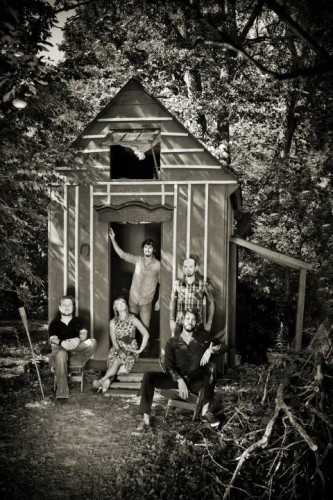 (BadWolf brings us another installment of the series he started here.)

Murder by Death have one of the best band names I have ever heard—even if it was stolen from a movie, it’s grim, funny, instantly recognizable, and incredibly catchy. In ways, though, it’s misleading—one might expect Murder by Death to be some sort of goofy gore-death band, a Cannibal Corpse ripoff. Not at all—but the music is grim and heavy.  Murder by Death are one of my all-time favorite not-metal bands, mostly because of their one absolutely perfect album: Who Will Survive, And What Will Be Left of Them. [WWS here out] Props to my folk-punk compadre Dan for turning me on to this band!

Murder by Death play morbid, cinematic rock mixed with noisy post-hardcore plus a folk-and-country edge—think a little bit of The Eagles, a little Modest Mouse, a little bit of Godspeed! You Black Emperor, and a buttload of Nick Cave. Their music stands as almost completely unique—especially at this stage in their career—and twists into frequently unsettling passages. Shortly after WWS, the band experienced a slight lineup change and focused more and more on the country elements of their music. I assure you their later output is still quality, but on WWS the disparate elements of their sound stood in perfect synchronicity. It is also probably their heaviest record—perhaps a direct result of playing Hellfest the year before. END_OF_DOCUMENT_TOKEN_TO_BE_REPLACED