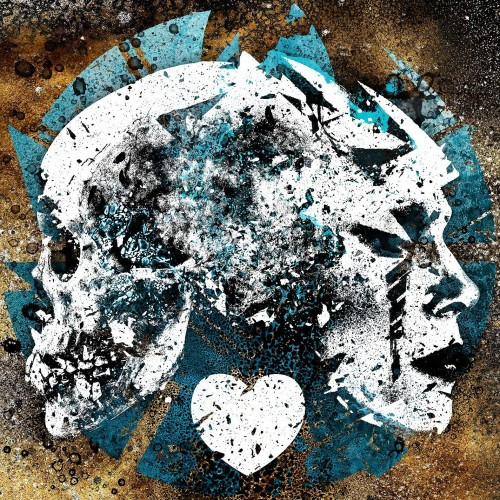 There are love songs and there are songs about love. What you’re about to see wouldn’t be anyone’s definition of a love song, but as Jacob Bannon explains on stage, it is a song about love. The song is called “On My Shield”, and it was self-released by Converge last July as a 7″ vinyl single (with Bannon’s stunning cover art, which you can see above). The song is full of roof-collapsing heaviness, and possibly it sounds even more brutally cathartic in this video. The imperfect, fuzz-distorted quality of the sound suits this song.

If you’ve ever seen Converge perform live, then you know these fuckers leave nothing in reserve — all they’ve got spills out on stage. They drain themselves, and they drain the audience, too. The imagery in this video captures that feeling and includes lots of clear close-ups. I also like the way it captures the glow of the stage lighting at night. But as BadWolf pointed out when he wrote me, maybe the best thing about it is when the fan shooting the video headbangs in sync with bassist Nate Newton, the camera moving smoothly up and down along with Newton. Very nice touch.

Check out the video after the jump, along with the lyrics. The song is a good reminder that in the battleground of life and love, don’t withdraw: It’s better to be carried out on your shield. One more thing: Also after the jump, we’ve added a stream of a brand new Converge song called “Runaway”, which was released on June 21. END_OF_DOCUMENT_TOKEN_TO_BE_REPLACED