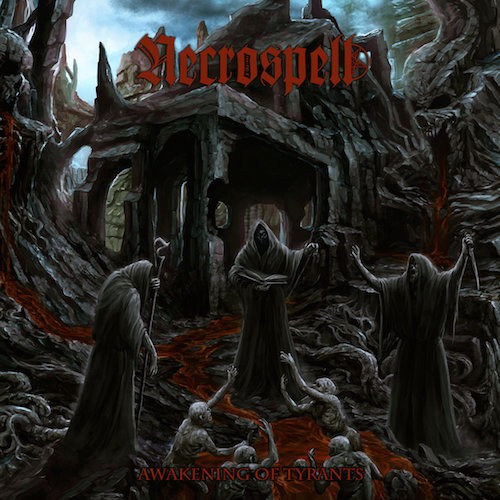 In the realms of extreme metal there is no assurance that the grave lays a lasting claim, no protection against the day when long-dormant musical ravagers will hungrily claw their way through unhallowed soil back to the surface, to gnash their teeth and spoliate the air waves once again. Not all such revivals of the ghoulish un-dead turn out to be welcome occurrences, but Necrospell are proving that their resurrection is one to be applauded.

Necrospell took their first fetid breathes in the early years of the ’90s and became one of the earliest extreme metal bands in southern Italy. By 1994 they had recorded a cult demo tape named As Darkness Falls, but by 1996 they had dissolved. Now, more than two decades later, they have returned with a line-up that includes the two original guitarists and new members.

Their new album, Awakening of Tyrants, will be released on November 23rd by GrimmDistribution (Ukraine) with Murdher Records (Italy), and to aid in their reanimation we have a mind-bending new song for you today, appropriately named “Restless Hate“. END_OF_DOCUMENT_TOKEN_TO_BE_REPLACED