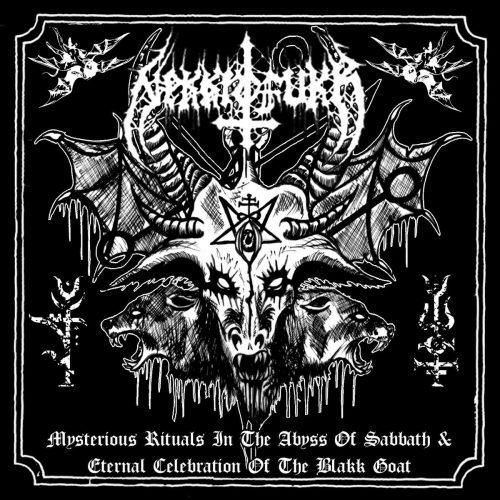 Let’s cut to the chase: We’re premiering a full stream of the new album by Poland’s Nekkrofukk on the day of its release by Putrid Cult. Like the last album two years ago, the title of this one is packed with evocative words: Mysterious Rituals in the Abyss of Sabbath & Eternal Celebration of the Blakk Goat. In its music, it’s primitive, crushing, pestilential, and foul, a blending of doom and black metal that seems to have bubbled up like poisonous ichor from a by-gone age.

Rarely do the songs accelerate beyond an earthquaking, mid-paced stomp, or provide reprieve from their moods of cruelty, oppression, and plague. Never do the vocals reveal any sense of humanity, so steeped as they are in bestial expulsions of disgust and damnation. When other melodic accents come in, they create an atmosphere of supernatural horror, rather than casting the listener a life-raft. Heads will move when listeners hear the music’s enormous carnal rhythms, and as ugly as the experience is, you may nevertheless find yourself falling into a narcotic trance as the album unfolds — albeit one that’s infiltrated by terrors. END_OF_DOCUMENT_TOKEN_TO_BE_REPLACED