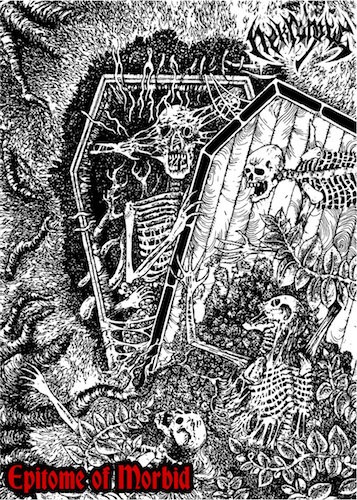 Nekrohowl were spawned last year in Dhaka, Bangladesh, its members coming together from other local bands with the intent of dedicating themselves to “abhorrent and paroxysmal Death Metal” in the grand and gruesome traditions of the ’90s. In doing so, they become a link in what is now a very long and tangled chain (one crusted in blood) that connects back in time to the likes of Suffocation, Autopsy, Immolation, Morbid Angel, and Hellhammer (among others), from whom they’ve drawn their foul inspirations.

There are, of course, a vast number of links in that globe-spanning chain, but some gleam brighter than others. Or, since we’re talking about old school death metal, maybe it’s more accurate to say that some links are more corroded and plague-infested, more likely to cut you, leave festering wounds, and produce seizures of madness. Based upon the quality of Nekrohowl’s debut EP, Epitome of Morbid, they’re definitely one of the brighter (and uglier) links in the chain — as you’ll discover when you hear the song we’re premiering, “Blasphemy Still Unnamed“. END_OF_DOCUMENT_TOKEN_TO_BE_REPLACED