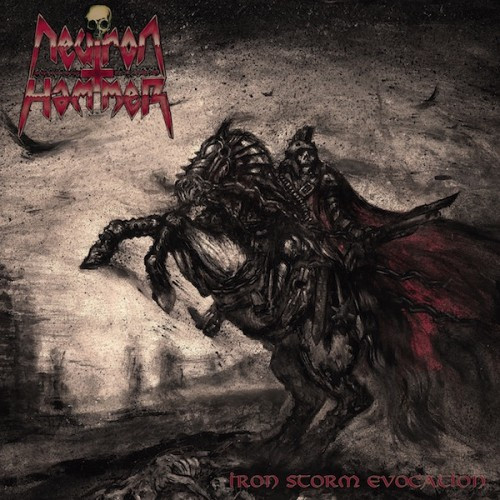 The album is the full-length debut by Finland’s Neutron Hammer, the culmination of nine years of effort that included a demo and two EPs. It doesn’t boast zooming technicality, ground-breaking creativity, or melodic hooks that you’ll be humming days later, but for this kind of music who wants or needs that? What Iron Storm Evocation brings is 40 minutes of blasphemous black thrashing death mixed with venomous black ‘n’ roll that’s a shitload of evil fun. It exerts a kind of animal magnetism that has brought me back to it repeatedly over the last month.

With few exceptions, the music barrels ahead at high speed with high distortion, and although the production quality isn’t really lo-fi, it’s close enough to coat everything in grime. The dominant musical style is blasting blackened thrash with rapid-fire chords and hammering percussion, sometimes blazing away with enough speed to fuse everything into the proverbial wall of noise. But no song on the album is really all one thing.

Even on the tracks where rolling hellfire is king, you get changes in rhythm and riffing that bring the beats of old-school punk, crust and d-beat, Motörhead on an open throttle, and pretty close to straight-up rock, without ever losing the authentic air of thoroughly blackened filthiness. There’s a dose of Venom and Hellhammer, an injection of of Impaled Nazarene and Nunslaughter, and even a bit of Discharge,  to go along with the hailstorm of infernal thrashing. END_OF_DOCUMENT_TOKEN_TO_BE_REPLACED