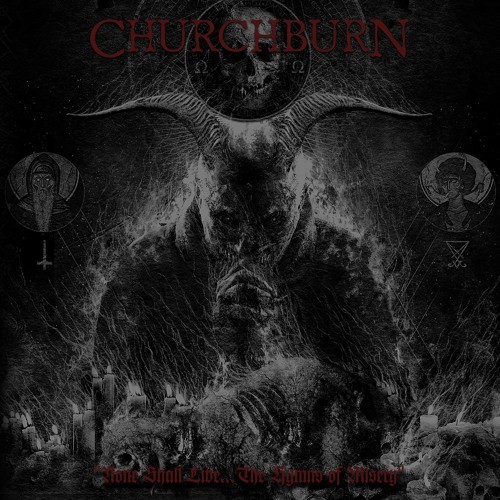 As mentioned yesterday, I’ve been missing in action at NCS for the better part of the last two weeks, attending one metal festival and helping present a second one. The last of these new music round-ups I was able to prepare came on May 18th. Since then, the flood of new metal has continued unabated rather than politely waiting until I could pay attention again. As a result, there’s perhaps even more than the usual degree of randomness in the following selections.

And speaking of randomness, I decided to include some country music at the end, which I learned about through a conversation on Sunday with Austin Lunn (Panopticon). And since I’ve now dropped his name, maybe you’ll be more likely to give the song a chance.

The dark handiwork of Nestor Avalos adorns the new album by Rhode Island’s Churchburn, the name of which is None Shall Live…The Hymns of Misery. It will be released on July 13 through the Armageddon label. Some new members have joined the band since their last album four years ago, and guest performers appear on the album as well. The first advance track, “The Misery Hymns“, is the song I’ve chosen to lead off today’s playlist. END_OF_DOCUMENT_TOKEN_TO_BE_REPLACED