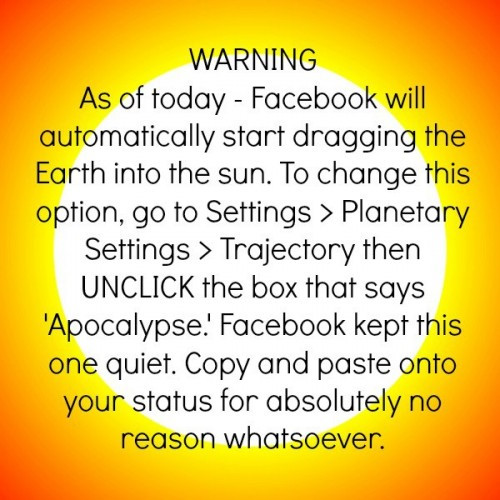 Yes, I’m afraid it’s time for another rant about Facebook. The pressure was building, and I needed to vent for fear that otherwise I’d have an attack of explosive diarrhea.

The last time I had to resort to this kind of diarrhea remedy was in June, when the subject was an exploration of the algorithms that Facebook uses to determine who gets to see Page posts and the rollout of Facebook’s Promoted Posts feature. In a nutshell, if you’re the admin of a Facebook Page and you add a Page post, Facebook doesn’t deliver your post to the news feeds of all your Page fans. At one point, Facebook reported that on average only 16% of your fans will see any given post.

Facebook does give you the option of paying them to expand the distribution of your posts. That’s the Promoted Posts feature. We’ve used that feature only for certain posts at the NCS FB Page — when we want to spread the word about a song premiere or new album stream here at the site — and, unsurprisingly, it definitely does work. The stats we get from FB show that our posts reach a much larger percentage of our FB fans, as well as FB Friends of our fans, though the reach is still not 100%.

But we’re not a business, we get no revenue from anyone for running NCS, and so there’s a limit to how much money we’re willing to spend to spread our content around the FB community. Impecunious metal bands aren’t any more likely to fatten up Facebook’s bank account in order to reach more of their fans either.

But it turns out that with Promoted Posts, Facebook was only getting warmed up. On Wednesday of this week Facebook rolled out a new “test” in the U.S. (they’ve been doing it longer than that in other countries). Now, even individuals get the awesome opportunity to pay FB in order to increase the visibility of shit like your wedding photos, pics of your newborn brat, where your band is playing next weekend, and big news like what you ate for breakfast. Wheeeeeee!!! END_OF_DOCUMENT_TOKEN_TO_BE_REPLACED