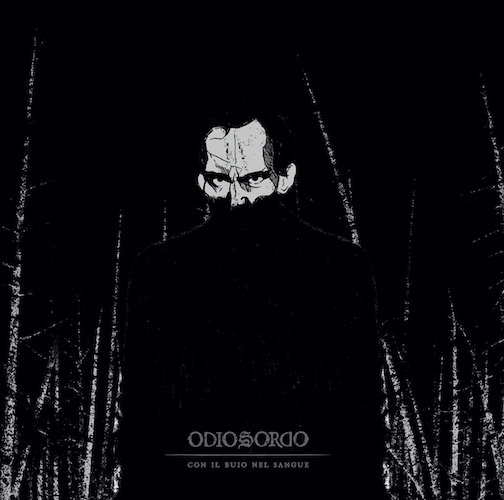 We’re told that “Odio Sordo” is the Italian translation for “Deaf Hate”, a phrase that connotes bitterness, fury, holding a grudge. And while the Italian trio Odiosordo have embraced those words in their name, and those sensations in their musical hybrid of hardcore and black metal, their new album Con Il Buio Nel Sangue becomes a musical journey in which different experiences also come to the surface. As they tell us, the name they’ve chosen represents internal struggle against personal challenges — “born by the need of merging a strong sense of discomfort, deep disorientation, but also the will of fighting back and finding a way through life.”

As you will have probably guessed by now, the music isn’t “easy listening”. It’s raw, bleak, and ravaging, stripped of pretense, authentic in its channeling of despair and rage, and of misery and defiance. Alternately bruising, oppressive, searing in its intensity, and soaring in its grasp for a way out of harrowing times, it proves to be a relentlessly gripping experience — and we’re giving you the chance to learn that for yourselves through our full-album stream today, before the record’s October 31 release by Third I Rex, VBMF (Italy), and the Third I Rex affiliate, Imperatrix Mundi Records. END_OF_DOCUMENT_TOKEN_TO_BE_REPLACED