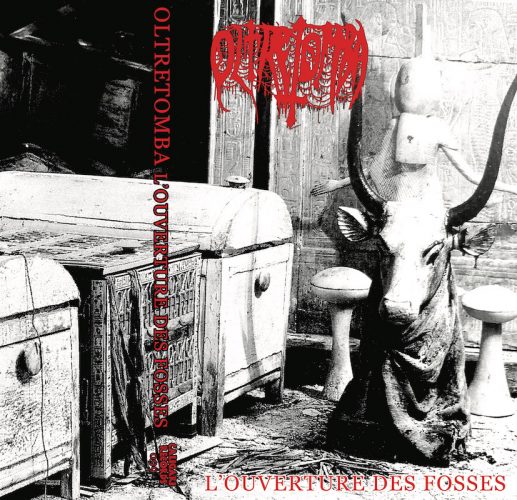 The allure of Oltretomba’s new album L’Ouverture Des Fosses is difficult to explain, and to be honest, its twisted mechanics may prove to be most alluring to those whose minds are already unbalanced. Or perhaps I should just speak for myself. “Nihilistic black doom, languishing eternally in the psychic realms of the half-dead” is the way Caligari Records describes the music. It is an unsettling combination of primitive and futuristic (or alien) ingredients — uncomfortable music that nevertheless mesmerizes, like a strong audio narcotic that grips the pulse, clouds the brain with nightmarish visions, and brings a sheen of cold sweat to the surface of the skin.

We’re told that the album was recorded in a World War II bunker, presumably one still haunted by the spirits of those who were mangled and burned within its confines. Perhaps the music was intended to bring them back to life; perhaps they participated in the recording; it wouldn’t be surprising if they had, given the chilling, spectral emanations captured within these six tracks. END_OF_DOCUMENT_TOKEN_TO_BE_REPLACED