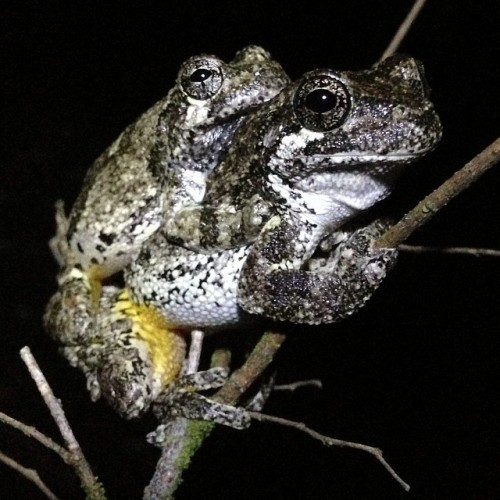 Here’s how this story goes:  Late yesterday afternoon I posted that photo up there on Facebook. I just wanted to make sure I had saved it because I think the sight of those two frogs fucking will always cheer me up on those rare occasions when I’m feeling down. And no sooner had I done that than Utmu suggested I needed to listen to Phyllomedusa while gazing upon the fucking frogs. So I did, and holy frog copulation, did it pulp my brain into pond scum. I wanted to turn it off, but I couldn’t.

The Phyllomedusa album I started cranking is called Puddle Dependency, and the cover is a photo of a frog. But of course it is. I’ll show it to you after the jump. I think the photo above would have been a better choice, but it’s a new pic (taken by Jana Miller) and wasn’t available when Puddle Dependency was released in January, so all is forgiven. Also, I don’t think these frogs belong to the right genus (more on that later).

There are 15 tracks on Puddle Dependency. Some are slower, some are faster, but otherwise they’re kind of hard to tell apart. However, they are all goddamn obliterating. Utmu told me the style of music is called “gorenoise”. I suggested that “frogrind” is better, especially since it’s one of the labels that Phyllomedusa uses. Utmu countered with “croakslam”, and that works, too. Be sure to pay attention to the song titles. END_OF_DOCUMENT_TOKEN_TO_BE_REPLACED