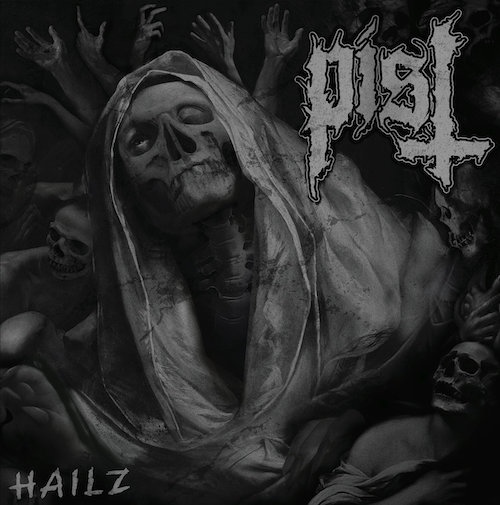 With their new album Hailz, released not long ago by APF Records, the UK band Pist took some significant steps away from the “stoner doom” label that had become affixed to their previous releases, even though the band had never been comfortable with that label in the first place. As vocalist David Rowlands has explained, “in our eyes we’re a heavy metal, rock ‘n’ roll band who listen to a fair bit of Black Metal and Punk”. Those interests come through loud and clear in the seven tracks on Hailz. As David has further said, he and guitarist John Nicholson had loads of ideas for riffs and basic structures, but when “we entered the jam room with these ideas and the four of us put our heads together it started growing and growing. I feel this record reflects more of our personal influences from shit like Darkthrone to Elder, Orange Goblin to Uada“.

“Fools Gave Chase“, the album track we’re presenting today through the premiere of a lyric video, bears out these descriptions of how the music took shape, and  is a great example of the hybrid of sensations that the album as a whole so powerfully delivers. Not for naught is the album described as a release that will appeal to fans of Orange Goblin, Kvelertak, Motörhead, Entombed, Uada, and Black Breath. END_OF_DOCUMENT_TOKEN_TO_BE_REPLACED