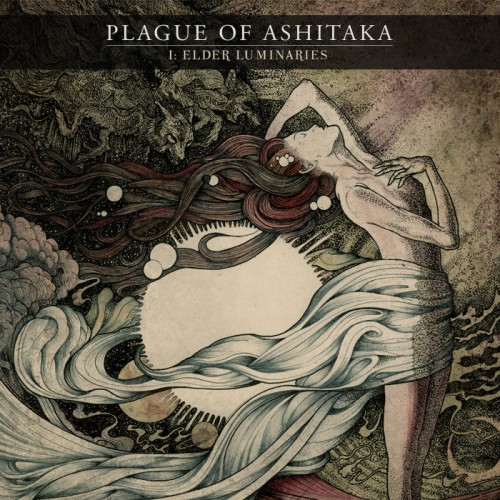 Yours truly hasn’t been posting much the last couple of days. The old fucking day job has unexpectedly had me traveling again and working nearly around the clock. Today won’t be much different — I’ll be on an airplane for about 6 hours going home.  So, this may be the last post until much, much later today. I’ve got a lot of stuff in mind for future posts, just no time to get them done. Tomorrow should be more back to normal.

So, this will be really fast. TheMadIsraeli sent me a link to a new video by an un-signed band from Brighton, England called Plague of Ashitaka. But I also saw the cover art for their new EP, which they call “Part I” of a new album, and this “part” is called Elder Luminaries. It’s by Richey Beckett, and it’s an eye-catcher for sure.

The song featured in the video is “Onyx Scroll”. It’s satisfyingly fast, vehement, and technically proficient. It’s got some -core elements, too, which either will or won’t appeal to you depending on your tastes. I enjoyed it.

The band’s Facebook page is here. The EP will be for sale here, but doesn’t yet appear to be available. Check out the video following the jump. END_OF_DOCUMENT_TOKEN_TO_BE_REPLACED