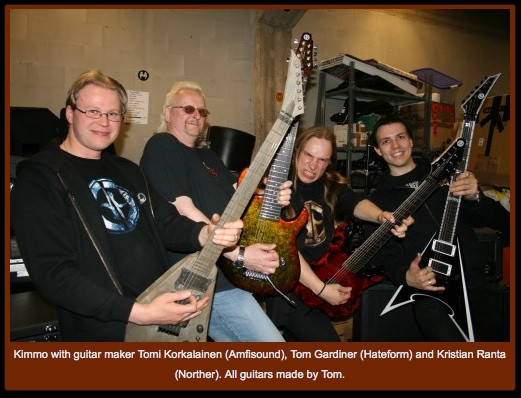 Our metallic blog sister from New Zealand, Steff Metal, is just finishing a Finnish Metal Week tribute on her site that I’ve been enjoying day by day as it has unfolded. The posts have been fun and informative, including a “Heavy Metal Travel Guide to Finland“, which I hope someday I’ll get to use. Two of her posts will be of extra-special interest to aficionados of Finnish metal:

Kimmo Kuusniemi of ground-breaking Finnish heavy-metal band Sarcofagus (which, btw, is still up and running) and his wife Tanja returned to Finland from where they now make their home in England to film a documentary about Finnish metal called Promised Land of Heavy Metal. According to Steff’s posts, one of which is an extensive interview with Kimmo and Tanja, they interviewed hundreds of metal musicians across diverse genres, metal fans, and music professionals about the scene, both past and present — including an interview of Finland’s president, Tarja Halonen!

The documentary is now available on DVD, and international distribution is just starting. Based on Steff’s interview and her separate review of the film, I’m stoked to see this thing. Steff’s posts about the film include instructions on how to order directly from Kimmo (which NCS has already done) — so if you’re a fan of Finnish metal (and who isn’t?), go check out Steff’s interview and review and the rest of her posts on Finnish metal here.