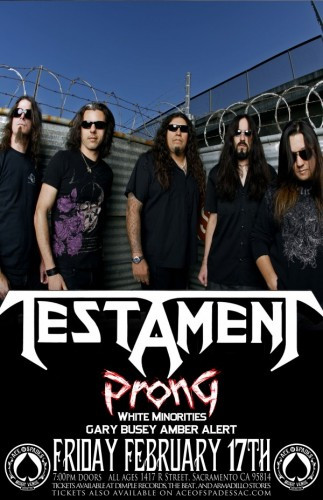 (DemiGodRaven provides this review of the Testament-headlining show in Sacramento, CA, on Feb. 17. Except for a drag-ass job of posting by your humble editor, the interval between the show and the review would have only been one week.)

Two weekends ago kicked the everliving fuck out of me. I went to two shows over the span of two days and basically spent Sunday in a coma because of them. Saturday was a huge local band party at the lovely venue out here known as The Boardwalk, and while I would love to review that one, my weekend was so hectic and tired that to be honest with you, the whole experience feels like a fever dream.

I will admit that’s probably shortchanging the dudes in Bispora (whose first show it was), Journal, GBAA, and Slaughterbox, but I know that I will be presented with other chances to talk about those groups at length. All I can say for now is you should look them up, they’re all really good.

The picture that you see above is the reason why I found myself in such a state. Friday, February 17th, I flew solo to a show for the first time in a while and went and fucking saw Testament. If I had to sum up my position on Testament as a group, it would be that they have been one of the most consistent thrash bands out there to date. When rumors of a big thrash tour would begin circulating, I was the one asshole who was secretly hoping that Anthrax would drop off and Testament could take their slot, or that the promoters would at least put Exodus and Testament on the bill as a bigger Titans Of Thrash-style tour.

You can tell these guys are icons in their own right, so all I really would’ve been pushing for would be to pull out the fans who went to those Big Four shows because they thought Metallica’s Black Album and the ones that followed have been fucking masterpieces.

That said, there are advantages to Testament being a bit on the underrated side, and one of the big ones is that I got to see them up-close and fucking personal at Sacramento’s Ace Of Spades. That to me is fucking incredible, because even though the Testament crowd is now much, much older than it used to be, it still felt like I was part of the burgeoning Bay Area thrash movement . . . which I missed because a) I hadn’t been born yet, and b) by the time a lot of these bands were gaining steam or simplifying their stuff for radio, I was a whopping three. END_OF_DOCUMENT_TOKEN_TO_BE_REPLACED