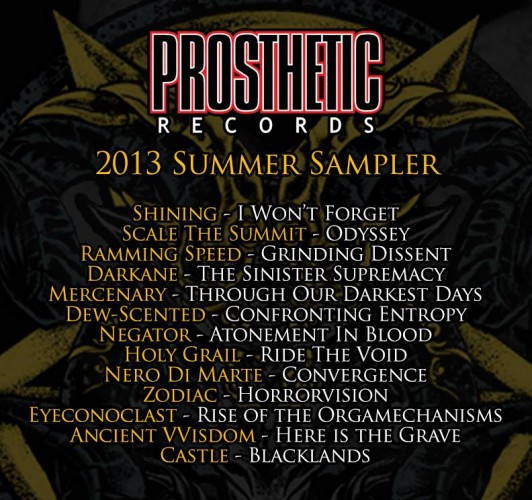 Here’s a nice piece of news that I missed when it happened a few days ago: Prosthetic Records has created a free summer sampler that includes 13 songs from 13 new and forthcoming albums by members of the label’s roster. I won’t take the time to list them in the body of this post since you can see them quite clearly in the graphic above. I’m familiar with 12 of the 13 bands (Zodiac being the outlier) and they are all very good (and the music’s very diverse)

I mentioned that the sampler includes tracks from forthcoming albums as well as new ones released earlier this year. To be specific, it includes songs from yet-to-be-released albums that we’re eagerly anticipating from Sweden’s Darkane (due on July 2), Denmark’s Mercenary (out July 30), and Boston’s Ramming Speed (to be released June 25).

To get the sampler, you’ll need to go to Prosthetic’s Facebook page via THIS LINK and download a .zip file of the music. When I tried it, it didn’t require surrendering of an e-mail or anything else — just a straight, immediate download of the file. In other words, painless. And that’s a hell of a line-up of songs.