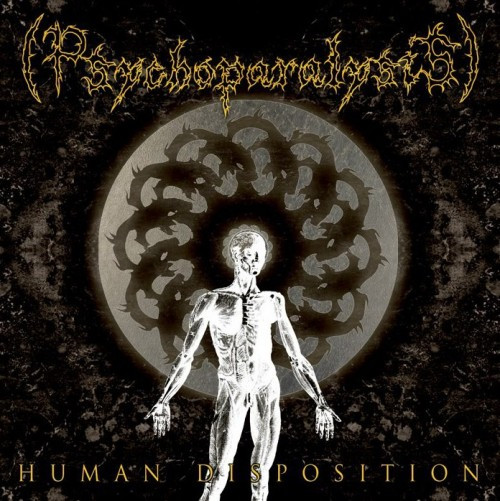 (We’re delighted to bring you a full-album stream of the new release by Finland’s (Psychoparalysis), and we precede it with this review by TheMadIsraeli.)

Who wants some old school early 90’s prog death? (Psychoparalysis) will have you covered pretty well on that front. Their debut album Human Disposition has me hooked, and I think it will hook you all as well. What we have here is old school goodness that calls back to the likes of Death, Atheist, Napalm Death, Pestilence, and Sepultura. It seems like regardless of what comes out that’s modern, polished, and boundary-pushing, my love ultimately still comes back to doing shit the old way. Something about the older sound of death metal just hits a note with me that I can’t say any modern-sounding band does as well. Maybe it’s the character, the ethos, or the fact that something about those bands just seemed to emanate an intensity we aren’t hearing as much nowadays.

Whatever the case, it’s obvious that (Psychoparalysis) have a passion for the brutal sounds of old, as I do. The album is pretty much a tribute to everything 80’s and 90’s on the brutality front. Opener “Throne Of Mammon/The Numbers Become My Enemies” is an immediate example of what’s in store — technical thrash riffing, death metal dissonance and excessive force, and prog song structures. (Psychoparalysis) have a very focused sound, and a recognizable one. It leans toward a vocal style that barely qualifies in the death metal realm, in the same harsh, thrash way that the vocals of Daniel Mongraine of Martyr do, dipping in and out of a bestial Barney Greenway-esque tone and back to harsh yells. END_OF_DOCUMENT_TOKEN_TO_BE_REPLACED