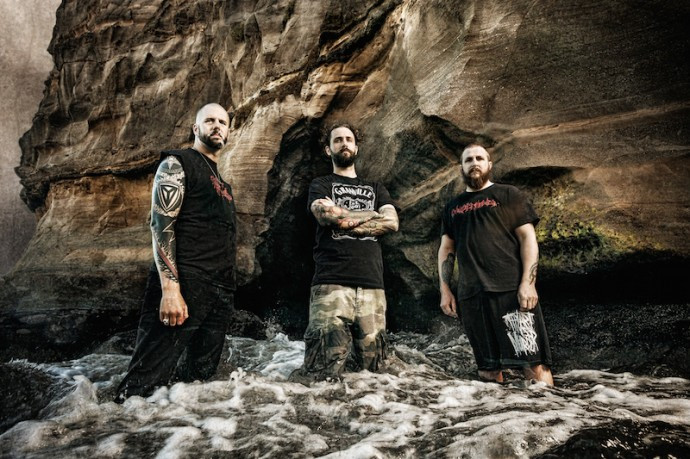 (New Zealand-based metal writer and broadcaster Craig Hayes brings us this interview with Rigel Walshe of New Zealand’s  Dawn of Azazel, whose phenomenal comeback album was released on April 28.)

A couple of weeks ago, long-running New Zealand death metal titan Dawn of Azazel released The Tides of Damocles, the band’s first album in six long years. Formed in 1999, Dawn of Azazel are a crucial band in the history of New Zealand extreme metal. Their 2003 full-length debut, The Law of the Strong, is a 100% blistering and battering classic. And, over the years, Dawn of Azazelhave toured the globe, reaped acclaim from all corners of the metal underground, and received high praise in the press at home and abroad.In 2009, after the release and touring for Dawn of Azazel’s third album, Relentless, the band went into hiatus. Frontman Rigel Walshe wanted to further explore career options outside of the music sphere at the time. And it’d be fair to say the return of Dawn of Azazelin 2015 has been greeted with rapturous applause both at home and offshore.The band headed back to Mana Recording Studios last year to record, mix and master The Tides of Damocles, and there’s no question that Dawn of Azazel have returned with a ferociously aggressive, dynamic, and wholly skull-cleaving album. No Clean Singing caught up with frontman Rigel recently to talk about the band resurfacing, his reflections on his time away from the metal underground, and what the future holds for one of death metal’s premier cult bands. END_OF_DOCUMENT_TOKEN_TO_BE_REPLACED