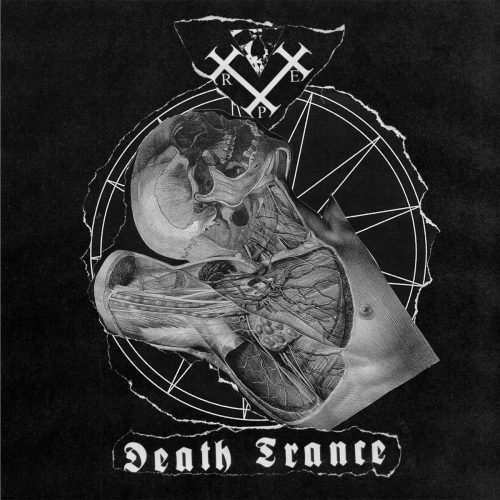 There you did offer them to the Prince of Devils
sitting upon his throne, and did draw off their fat to be kept
for your use, and cut off their heads, hands, and feet, and did
cook and stew their trunks, and sometimes roast them, and at
the bidding of your aforesaid evil Father did eat and
damnably devour them.

Those words were among the extravagant condemnations of witches included in a death sentence announced by the judges of Avignon in 1582. If you scroll down the Facebook page of RXAXPXE, you will see those same words, preceded by the pronouncement: “We are doing the Devil’s work.” And when you listen to the sounds created by RXAXPXE (a name more easily pronounced when you mentally remove the Xs), you will have little doubt of that.

The latest of RXAXPXE’s creations is an album named Death Trance, which will be released on May 31st by Dunkelheit Produktionen. It is a three-track, 30-minute audio rite that draws upon a mind-mauling mix of Terror Noise and Power Electronics. The first of those tracks has been previously revealed, and today we’re streaming the third, leaving one in the middle undisclosed. END_OF_DOCUMENT_TOKEN_TO_BE_REPLACED