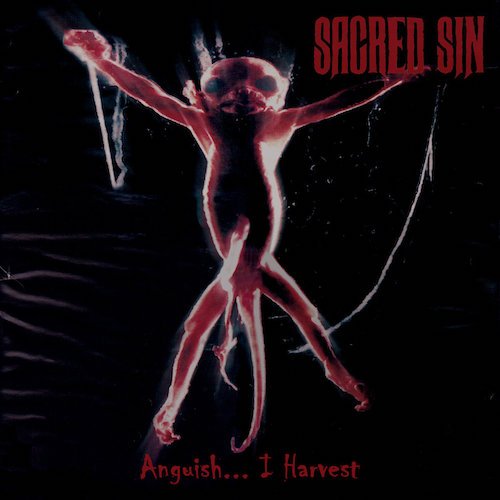 The Portuguese band Sacred Sin released their first demo in 1991, qualifying them as one of the country’s earliest practitioners of metallic extremity. Their debut album Darkside, released in 1993, began a sequence of five albums in which the first letters of the titles spelled out the word “Death”. The last of those, Hekaton – The Return To Primordial Chaos, come out in 2003. And then a long hiatus followed before the band resurrected themselves and released 2017’s Grotesque Destructo Art — which is their most recent album to date.

It’s fair to say that the sound of Sacred Sin has varied over time, with death metal being the core but with changing integrations of elements from other sub-genres. The band’s third album, Anguish​.​.​. I Harvest, is especially difficult to pigeon-hole in genre terms — and it might be the band’s best and most distinctive album of all.

Originally released in 1999, Anguish​.​.​. I Harvest will be reissued on April 19th by two Ukrainian labels — GrimmDistribution and Envenomed Music — in a special remastered edition that also includes six bonus tracks from a 1997 rehearsal demo, and today we’re premiering one of the remastered tracks, a song named “Fire Throne“. END_OF_DOCUMENT_TOKEN_TO_BE_REPLACED