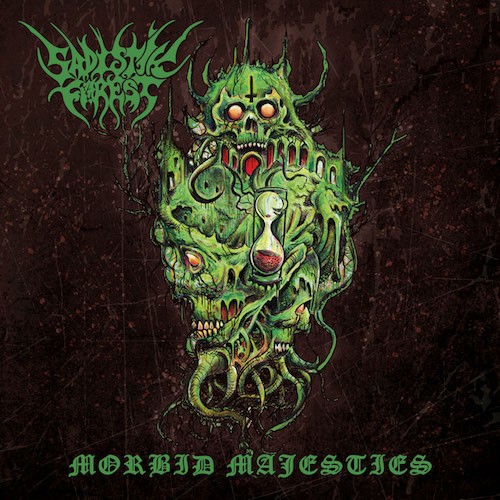 The death metal of Sadistik Forest is a destructive art, a morbidly majestic revery on a life characterized by decades of torment, and then death — zero progress lies behind, the hour of dread approaches, and then the maelstrom opens, the monsters of death come slavering forth from a place where the bones of a giant lie waiting for you to join them.

And in case you haven’t figured it out, all the song titles on the band’s new album, Morbid Majesties, were stitched together into that opening sentence in a way that suggests a narrative, but also conveys some of the moods in this band’s potent attack on the senses. What that sentence doesn’t adequately convey, however, is how tremendously vibrant the music is, and how well-crafted the songs are to achieve an immediate visceral impact while also digging their hooks into the listener’s head. We’ve got a prime example of this in the song we’re premiering today: “Zero Progress“. END_OF_DOCUMENT_TOKEN_TO_BE_REPLACED

Another month has ended, and like a drug-resistant strain of sexually transmitted disease, we’re still here.

And because we’re now a full six months into 2010, it’s time for another monthly update to the list of forthcoming new albums we first posted on January 1. (All the other updates can be found via the “Forthcoming Albums” category link on the right side of our pages.) Below is a list of still more projected new releases we didn’t know about at the time of our previous updates, or updated info about some of the previously noted releases.

So, in alphabetical order, here’s our list of cut-and-pasted blurbs from various sources since our last update about forthcoming new releases. Look for the bands you like and put reminders on your calendar. Or if you’re like us, just stick post-it notes on your forehead. Of course, if your foreheads are the low, sloping kind, you may only have room for a few, so be choosy.

BURDEN OF GRIEF: “German melodic death/thrash metallers BURDEN OF GRIEF will release their new album, Follow The Flames, on July 2 in Europe via Massacre Records. The follow-up to 2007’s Death End Road will contain 10 new songs. The limited-edition version of the CD will include a bonus disc featuring cover versions of eight metal classics.”

CEPHALIC CARNAGE: “Denver, Colorado-based technical death/grind metallers CEPHALIC CARNAGE have set Misled By Certainty as the title of their new album, due on August 31 via Relapse Records. The follow-up to 2007’s Xenosapien was recorded at the band’s own studio with longtime engineer/producer Dave Otero. The CD is described in a press release as a ’50-plus-minute journey into metal’s most extreme realms’ which ‘see[s] these veterans takes it to edge before pulling it back with ‘Repangea’, perhaps their most sprawling and epic work to date.'”

(lots more after the jump . . .) END_OF_DOCUMENT_TOKEN_TO_BE_REPLACED