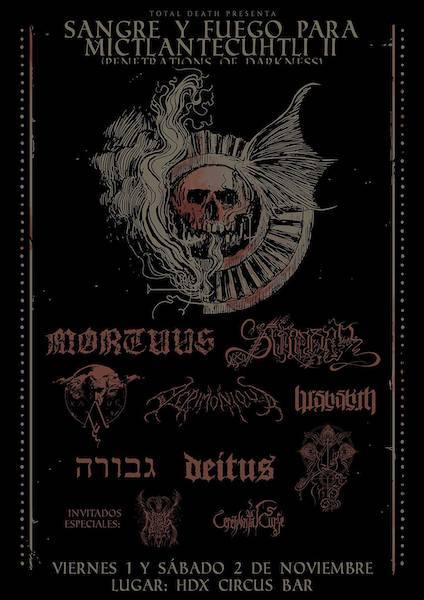 We don’t make an effort to comprehensively post about every metal festival scheduled to occur around the world, which would be something close to a full-time job all by itself. But every now and then one catches my eye that seems worth highlighting, because of the risk that it might not receive the attention it deserves, and this is one of those times.

Formerly called “Penetrations of Darkness“, this event was originally scheduled for July 19th, but has since been rescheduled and expanded into something even more ambitious. The concert is now called “Sangre y Fuego para Mictlāntēcutli II” and is a two-day festival, which features 10 bands from all over the globe. The event will be hosted by HDX Circus Bar in Mexico City on Friday, November 1st and Saturday, November 2nd, which coincides with the end of the Día de Muertos celebration, also known as “Day of the Dead.” END_OF_DOCUMENT_TOKEN_TO_BE_REPLACED