Over the last two months, as I made my way through the hundreds of songs that had become candidates for this list, I fell into the habit of grouping certain songs together for listening purposes, usually because I thought they would complement each other. The first three in today’s quartet formed one of those playlists, and they kind of got stuck together in my head. I enjoyed the trip through them so much (and so often) that I decided all three belonged on this “Most Infectious” list, and that they should stay together here, just as they did when I was trying to figure out this list as a whole.

And then in recent days I found that another song I had already decided to include worked well as an addition to the original trio — which is why this installment includes four tracks instead of the usual two or three. (The songs that preceded these four on the list can be found here.)

When I included “The Aftermath/Beginning” on the list of candidates for this series, I had forgotten that Gloson’s Yearwalker was originally self-released in 2014, because we “premiered” this song from it last February in advance of its March 2015 vinyl release by Art of Propaganda and Catatonic State Records. When I remembered only days ago that the song was from a 2014 release, it was too late for me to abandon it (see the paragraph above about the first three songs in this post being joined at the hip). END_OF_DOCUMENT_TOKEN_TO_BE_REPLACED 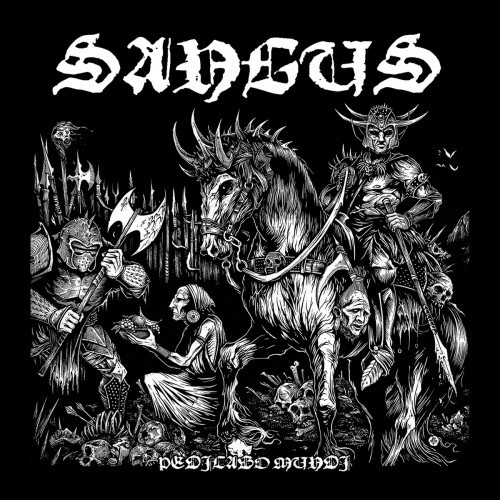 One reason I’m perpetually far behind in my planned reviews is a tendency to unexpectedly and impulsively get caught up and carried away by new music. That’s what happened this afternoon.

I was just about to start writing something I’ve been meaning to write for a long time when I noticed that a friend had sent me a link to a stream of a forthcoming EP entitled Pedicabo Mundi by a band from Providence, Rhode Island, named Sangus. I decided to delay my other project just long enough to listen to the EP’s first song. I mean, that first track was less than three minutes long — how could that hurt?

Man, that first song hit me like a lightning bolt, and with all my nerve endings twitching like mad, I damned well couldn’t turn away, now could I? And so I listened to the rest of the EP, and then listened again, and then began flailing away at this write-up. END_OF_DOCUMENT_TOKEN_TO_BE_REPLACED