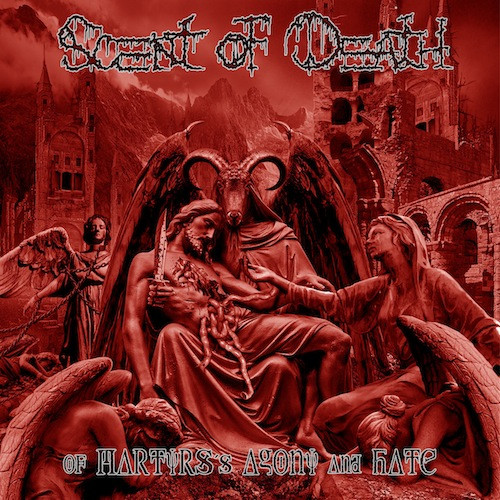 Spain’s Scent of Death has recently released their second album . . . which followed the first one by approximately eight years. The new one has proved to be a real eye-opener for me. Whatever this band accomplished in the past, their new offering is an atomic-grade kick in the teeth — and in the head, and in the kidneys, and in other vulnerable organs.

Entitled Of Martyrs’s Agony and Hate, it calls to mind the likes of Suffocation, Hate Eternal, Dying Fetus, and Morbid Angel. Hell, I might as well throw in references to Origin and Behemoth, because I thought of them, too, at different points on the album.

The music is a non-stop onslaught from start to finish. It’s brutal, bruising, and bludgeoning, but it’s executed with an impressive degree of technical flourish. The songs are loaded with punishing grooves and fire-breathing guitar solos, with gut-level vocals that summon up images of voracious lions. In short, it’s a nasty piece of work.

Today we’re stoked to bring you the exclusive premiere of the album’s sixth track, “Man Kills God Too”, which we hand-picked from among the album’s 9 songs. The album’s first song premiered earlier this year, and we’re including a stream of that one, too. END_OF_DOCUMENT_TOKEN_TO_BE_REPLACED