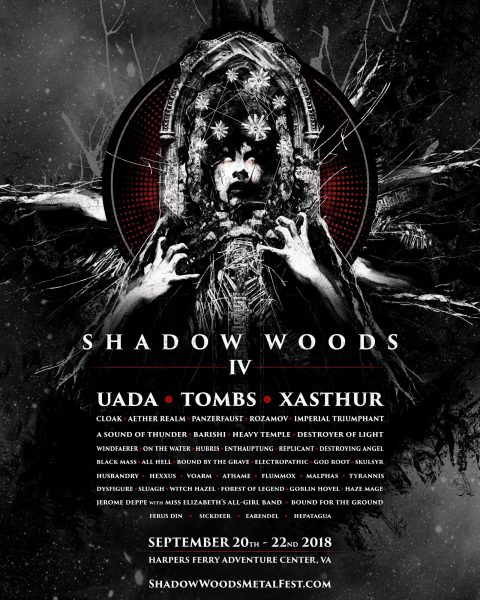 For a time, it looked like last year’s edition of the marvelous Shadow Woods Metal Festival would be the last one. The Maryland property where the event had been held for three years was sold, and the odds of finding another mid-Atlantic location that could preserve the festival’s unique character as an open-air camping, heavy metal gathering seemed daunting. But inspired by the fervor of previous festival goers who did not want to see this end, festival founder Mary Spiro began working behind the scenes, searching for a new venue and raising needed funds through contributions from past attendees. The work paid off.

Late last week Shadow Woods announced that a fourth edition of the festival — now known simply as Shadow Woods IV — will take place from Thursday, September 20th through Saturday, September 22th in Purcellville, Virginia, at Harpers Ferry Adventure Center (HFAC). And that news was accompanied by the disclosure of the entire confirmed line-up of more than 40 bands — which we’ll get to right away, and then provide a few more useful pieces of information.

So, here’s the line-up, day by day, with the bands listed in reverse order of their appearance (with headliners at the top) and brief commentary by the fest: END_OF_DOCUMENT_TOKEN_TO_BE_REPLACED