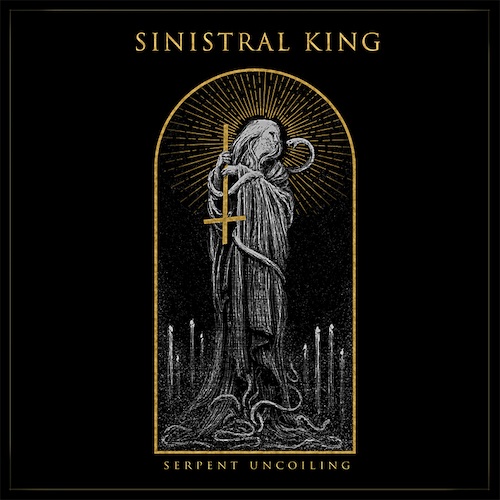 (Here’s Andy Synn‘s review of the debut album by the multinational European band Sinistral King, which is being released today — April 24th.)

Ah, the best laid plans of mice and men… how easily they go astray.

Case in point, I had, originally, intended to take today off from NCS work and leave this particular album until next week, where I planned to make it part of a six-album, Black Metal-focussed, round-up (which, just to be clear, I’m still going to do).

However at the eleventh hour I was struck with a sudden surge of inspiration, a compulsion to get this one written up as soon as possible, hence why I’m back again with my fourth review of the week.

The extra effort is all worth it though, because I can say, without a shred of hyperbole, that Serpent Uncoiling is one of the best Black Metal albums of the year so far. END_OF_DOCUMENT_TOKEN_TO_BE_REPLACED

Sinistral King is a new formation that only began to take shape in 2018, but its members are not newcomers to the dark musical arts of death and black metal which form the backbone of this new band’s music, because Sinistral King‘s line-up features members of Unlight (Germany), Triumph of Death (Swizterland), and Vredehammer (Norway). But while each of the members brought their own experiences and influences to this new endeavor, they have not been confined by them, but have also integrated other stylistic ingredients into their songwriting and execution, which is richly displayed on their debut album, Serpent Uncoiling.

This new record consists of five significant tracks, each of which creates dramatic contrasts yet also draws all the differing movements together in unifying ways that manifest pitch-black occult darkness. Their success in doing so is vividly displayed by the album’s title track, which we’re premiering today in advance of the album’s release by Vendetta Records on April 24th. END_OF_DOCUMENT_TOKEN_TO_BE_REPLACED