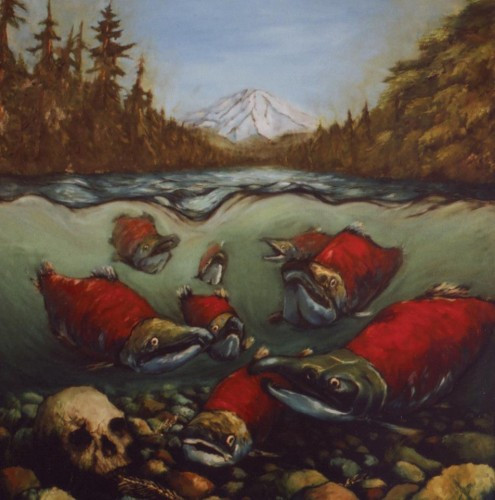 Replenish Records is a label based in Washington, D.C., that I discovered only yesterday. What caught my attention in their e-mail to me was their impending release on double-vinyl — and as a free digital download — of an album previously pressed only on cassette: Tahoma, by the band Alda. I saw Alda open for Agalloch in Seattle last year, and they floored me. So the chance to get this album as a legit download was hot news.

In the same e-mail, Replenish reported their release on vinyl (and as another free download) of the debut full-length by a Tennessee band called Sky Burial. That was a new name to me, but I decided to check that out, too, especially because I found the minimalist album art strangely appealing. So, here are a few more words about each band and then a chance to hear their music. At the end of the post, you’ll also find a link to the Replenish Bandcamp page, where more releases can be explored.

Alda are from Tacoma, Washington, just down I-5 from the NCS stomping grounds in Seattle. They are a black metal band cut from the same Cascadian cloth as Agalloch, so if you are a fan of the latter (as I am, in spades), there’s a good chance you’ll get off on Alda, too. They have a similar nature-centric take on the music and a similar ritualistic approach to their live performances. Their songs are long and often hypnotic, with tribal percussion, and memorable, sweeping melodies. But they also know how to slash and burn. END_OF_DOCUMENT_TOKEN_TO_BE_REPLACED