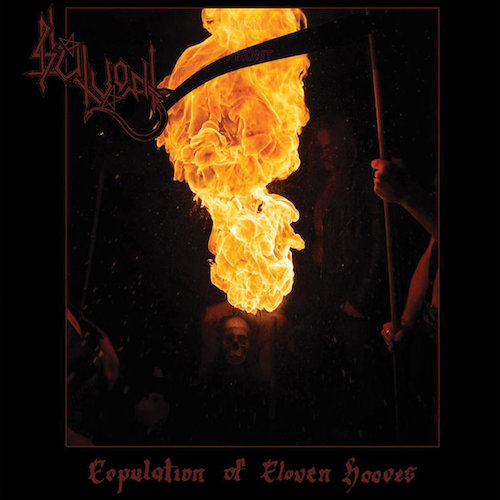 Seattle-based Slutvomit released their debut album Swarming Darkness six years ago through Invictus Productions, and left incinerated wreckage in their wake. Summed up by one prized reviewer (autothrall) as “dirty vest-slinging speed-death thrashing black madness”, it demonstrated a ton of high-octane energy, authentically barbarous and blasphemous spirit, and fiendishly impressive instrumental skill. In the years since then there have been some line-up changes, and as their new album proves, a lot of honing of their blades to an even sharper edge.

It’s commonplace for labels, publicists, and bands themselves to say that a group’s newest release is a step ahead of their last one, but here it’s verifiably true. Slutvomit‘s second album, Copulation of Cloven Hooves, again due for release by Invictus Productions (on October 4th), takes every good quality from their debut album and elevates it, while retaining the music’s capacity to set your hair on fire and race you ’til you’re out of breath. END_OF_DOCUMENT_TOKEN_TO_BE_REPLACED