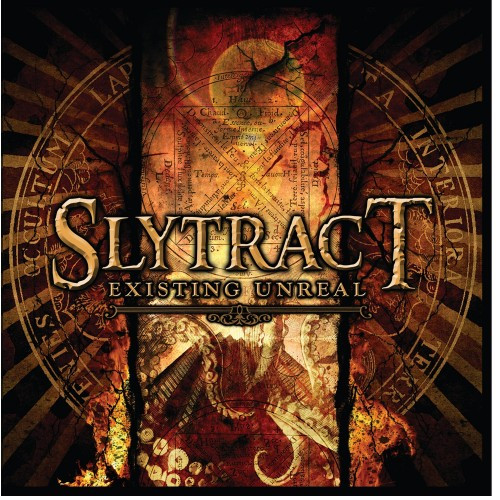 Slytract is a three-man band from Hungary whose new album (their second) is one of the most pleasant discoveries I’ve made this year. I gather from my reading that their 2008 debut, Explanation: Unknown, was a raw mix of thrash and death metal, but the new release, Existing Unreal (which will become available on August 26), stands four-square in the territory of hi-octane melodic death metal, and man, is it an accomplished planting of the flag in that territory.

There are no ho-hum songs on this album — I thoroughly enjoyed every one of them. Because of the mature song construction and the band’s facility in the creation of distinctive melody and rhythm, I looked forward to each track on the third and fourth listens as much as on the first. Though there’s continuity in the band’s stylistic identity from the record’s beginning to its end, most reminiscent to me of the almighty Insomnium (except with more pedal-to-the-floor pacing), each song has its own personality.

In its execution, what makes Existing Unreal a cut above the average MDM offering comes down to one person — Gábor B. Melegh. He provides most of the vocals and he’s the band’s sole studio guitarist (Gyula Czeglédi is the second guitarist when the band plays live). Vocals first: He sounds like Amon Amarth’s Johan Hegg, which means that no matter how high-flying or approachable the melodies may become, the songs have a counter-balancing bestial edge that will scare away all the hipsters and casual metal dabblers, which is just fucking fine by me. (more after the jump . . .) END_OF_DOCUMENT_TOKEN_TO_BE_REPLACED